President Trump has said that the markets will crash if he is impeached. Is he right?

The political instability from both Nixon’s and Clinton’s impeachment proceedings did cause market sell-offs. However, that’s not the whole story. Let’s dig a little deeper to get a clearer picture.

From the start of Nixon’s second term in 1973 to his resignation in August 1974, the markets, using the Dow and the S&P 500 as proxies, dropped about 25-30%. Subsequently, until the end of 1974, they continued to drop another 15-20%. On the day that the House authorized an impeachment inquiry, the markets were actually up fractions of a percent. 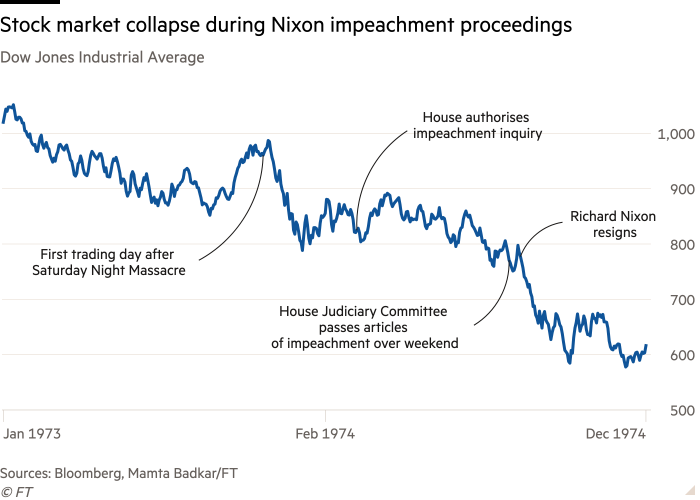 The question is whether we can use this reference to trade around the current political climate. Well, in 1973 and 1974, there were also major geopolitical tensions that pressured the markets downward, including the Israeli-Arab war and the oil crisis. The following years, in 1975 and 1976, the stocks rebounded significantly, 35% and 19%, respectively.

So, is there anything in those data to help us profit surrounding Trump’s potential impeachment proceedings? Well, perhaps like they react most of the time to uncertainty, the markets may break. However, timing this move well enough to make it profitable is extremely difficult. In both of the examples, the markets rallied significantly soon thereafter.

Market-timing strategies don’t work in general because you have to know both when to get in/out and when to get out/in. And, like during the Nixon impeachment, there are also global tensions now that can have as much impact on the market’s reaction. For example, solving the US-China trade war may lift the markets enough to overcome the downward pressure from Trump’s impeachment.

Here’s the bottom line. The markets are efficient. They incorporate all available news, information, and expectations. The expectation that Trump may or may not be impeached is already priced in. And the only information that will change how likely the markets think he will be impeached is tomorrow’s news, which no one can predict. Your best odds of capturing returns and mitigating risks is still with discipline, relying on a risk-appropriate, well-diversified portfolio of low-management fee index funds.