Emotion and psychology can make us behave in unpredictable and irrational ways. Unfortunately, many of our cognitive biases also influence our trading and investing decisions.

People struggle to separate their emotions from their investment decisions. Following a reactive cycle of excessive optimism and fear may lead to poor decisions at the worst times. Investors are much better off investing with discipline for the long term, rather than trying to speculate the market in the short term.

Focus On Actions That Add Value 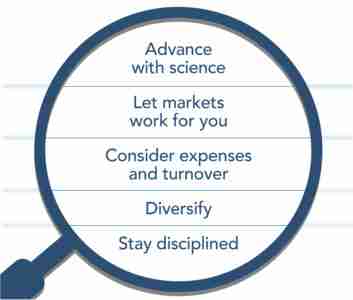 Let’s look at a few examples of our inherent biases. For additional reading, I recommend books by Richard Thaler, who is a professor at the University of Chicago Booth School of Business, the 2017 Nobel Laureate in economics, and considered the founding father of behavioral economics. Search for Nudge (Penguin Books; February 24, 2009) or Misbehaving (W. W. Norton & Company; June 14, 2016).

Despite the overwhelming evidence that proves beating the markets is futile, one reason why we continue to try is our overconfidence bias. Overconfidence leads investors to overestimate their knowledge and ability while underestimating risk. Overconfident investors persist in making stock picking and timing decisions precisely because they believe positive returns are attributable to their skill, while losses are due to some uncontrollable or unrelated force like bad luck. In reality, when speculating, there isn’t much difference between skill and luck. Yet we tend to overemphasize the winning trading decisions at the expense of the losing ones, which helps perpetuate our belief in our supposed skill.

Another prevalent behavioral bias is hindsight, which also feeds into our overconfidence. With hindsight, investors can convince themselves that a transpired event was predictably obvious. Similarly, we tend also to seek out information that supports our beliefs at the expense of disconfirming or objective information (confirmation bias). The indicators for a rallying stock market, plunging oil prices, or bursting bubbles in market sectors that cause a widespread recession seem to be well defined and easily identified after the fact. Looking back now to the great recession, in hindsight the warning signs seem quite obvious. Yet at the time and leading up to the market crash, those indicators were not as clear, nor were there more than the usual number of doomsayers sounding the alarms. Indeed, an overwhelming majority of analysts predicted smooth sailing ahead and the credit agencies rated the mortgage-backed securities as AAA. Of course, subsequently there were no shortages of talking heads in the financial news media claiming that the last financial crisis was inevitable. It seems the so-called professionals are not immune to cognitive biases nor is their track record any different from that of the average investor, nor for that matter better than that of a monkey or a cat, and on average is worse than a flip of a coin (for more related information, check out the Literature listings in our Learn More section…or just search online for grading the financial experts).

How about individual stock picking? Several stocks probably stand out for having had incredible returns. Among others, Apple, Google, and Amazon have made some investors quite wealthy. In hindsight, we may regret not having bought those stocks when they were trading at bargain prices. However, did those stocks really seem cheap at the time? If that was the case, then surely we can identify a few bargain-priced stocks now that have similar growth prospects to make us rich. Which among the thousands of stocks will become the next Microsoft? Perhaps the answer to that question turns out to be more difficult. If so, what makes us think that it was different the last time?

Although future events remain impossible to confidently predict, individual investors and the supposed experts alike will continue to irrationally believe in their unfounded superior talent to pick winning stocks and outguess the markets.

Consider another simple, yet powerful bias—anchoring—which nudges investors to disproportionally rely or fixate on a target value, usually the first one they get. Try to remember the last time that you may have been in the market for a used car. Let’s say you found the perfect one advertised for $31k at your local dealer. Your research leads you to believe that the fair price for the car is $25k. You go to the dealer prepared and plan to start the negotiations with $23k. Before you make the first bid, the salesperson sitting across the table from you offers the car for $30k. That’s more than what you anticipated and much more than what you planned to bid. Do you then forget about your research and consider upping your initial bid to $24k, $24.5k, or even $25k? Although nothing else has changed, that first price offered by the salesperson may dictate how the negotiation proceeds simply because it was the first value assigned to the car. Would you feel more comfortable bidding $23k if the salesperson offered it to you first for $27k? What if you started the negotiations instead? Would anchoring the car’s value to $23k have made the negotiations more likely to go in your favor?

Although it may seem quite simple, the initial value placed on an item is a powerful “anchor”. Similarly, investors tend to disproportionately put a greater value to past prices, just like they may overweigh the importance of the first value to which they fixate during negotiations. A stock that’s trading $65 today may deceitfully seem like a bargain if it was trading $100 last week. Or it it’s trading $150 today, it may seem expensive. Rather than news and new information that millions of market participants have priced into a stock, we tend to overemphasize past prices. For all practical purposes, markets are efficient by processing all news and available information, which means that the current price for a stock at any moment is the fair one. The only information missing from the price is tomorrow’s news, which no one can predict.

The next time that you negotiate the price of an item, try to make the first bid (if buying something) or offer (if selling). Simply being the first to place a value on the item may just help you “anchor” from where you want the negotiation to proceed.

It is also easy to fall prey to the fallacy that a certain event is more likely to happen after a series of other events. Many gamblers playing the slot machine believe that every losing pull is bringing them closer to the jackpot. Just like it must be true that the probability of flipping heads is much higher if the previous 20 flips of the coin were tails. In actuality, the probability of flipping heads is the same for each and every subsequent turn, regardless of the previous outcome, as is the probability of hitting the jackpot on a slot machine, assuming the machine’s programming generates random events. If the outcome of the next event is independent of the one previous, then a historical series of events do not statistically alter the probability of the next.

This gambler’s fallacy unfortunately applies to investing as well. An investor is more likely to liquidate a winning position in a stock that has rallied for several sessions because it must now be less likely to rally again the next. Similarly, an investor is more likely to hold on to a losing position over many more sessions because it must now be more likely to rally. Statistically, the results from the previous sessions should not determine the outcome of the next. What matters more instead is the latest news and information. Consider, however, a slight caveat to this, the phenomenon of momentum. We still don’t understand momentum well and it does decay quickly. Regardless, when markets have momentum they tend to sustain their rise or fall, which means, all things being equal, the likelihood is higher for winning positions to keep rallying and for losing ones to continue to fall. This again is quite opposite from our inherent tendency for liquidating our winners before our losers.

Yet there is also something else going that determines how long we hold on to winners and losers. Irrationally, an investor is relatively risk averse with gains and risk seeking with losses. In other words, we have a much harder time accepting losses than we do gains. This is another reason an investor may liquidate a winner much sooner than he/she will a loser. The emotional gain from locking in the profit is lower than would be the emotional distress from realizing the loss, so we keep the losses longer. This difference in the emotional utility from gains and losses leads to inconsistent investing risk preferences.

Inherent decision biases, utility functions, and unbalanced risk preferences suggest that investors are at a great disadvantage. Trying to overcome these cognitive biases may be insufficient. Even the professionals have a dismal track record with their supposed skill. Some studies suggest that less than 2-3% of managers outperform their benchmarks, which is the same probability that we would expect from pure luck (see related articles in the Learn More section).

Considering the evidence, the rational response by individuals to conventional strategies—like stock picking and market timing—would be to not play at all. Individual investors can instead become more rational by playing the game on their own terms. They can instead participate by focusing on asset allocation, then investing in a risk-appropriate portfolio of low-cost, globally-diversified index or asset funds for the long term.

The next time that you think about buying that stock or selling your equity portion from a portfolio based on a hunch or a headline, consider whether it’s really your biases that may be pulling the strings. Instead, perhaps you too can become more relaxed and rational about investing. Pursue a better investment experience by focusing only on actions that add value.