Considering recent market volatility and worrying financial news media headlines, I have decided to republish this post about yield curve inversion, a hot topic these days. Originally posted September 2018, it describes whether there is a relationship between yield curve inversion and stock market returns.

Eugene Fama, Nobel Laureate and Distinguished Professor of Finance at the University of Chicago Booth School of Business, and Kenneth French, Distinguished Professor of Finance at the Tuck School of Business at Dartmouth College, have recently submitted a new paper on the topic, “Inverted Yield Curves and Expected Stock Returns”, first draft dated July 28, 2019. Both Eugene Fama and Kenneth French are on the Board of Directors at Dimensional Fund Advisors.

They concluded that there is “no evidence that yield curve inversions can help investors avoid poor stock returns,” and continue, “The simplest interpretation of the negative active premiums we observe is that yield curves do not forecast the equity premium. This interpretation implies that investors who try to increase their expected return by shifting from stock to bills after inversions just sacrifice the reliably positive unconditional expected equity premium.” You can read the paper here.

What does this mean for you? Simply, it’s just more supporting evidence that market timing is a losing investment strategy. Instead, your asset allocation is the main determinant for your returns. If it’s risk-appropriate for your tolerance, then you will be emotionally prepared for market volatility. Remember, without market volatility, there would be no risk, and without risk, there is no expectation for reward. To help improve your odds of investment success, resist the temptation to react to short-term market swings, stay disciplined, and focus on the long term.

What is a yield curve, and why are stock investors interested in its shape?

A yield curve gives a snapshot of how yields vary across bonds of similar credit quality, but different maturities, at a specific point in time. For example, the US Treasury yield curve indicates the yields of US Treasury bonds across a range of maturities. Bond yields change as markets digest news and events around the world, which also causes yield curves to move and change shape over time.

Exhibit 1 includes snapshots of the US Treasury yield curve on the last trading day of September for the last three years. Rates across the entire curve have generally moved higher since 2016. However, short-term rates moved at a faster pace than long-term rates leading to a “flattening” of the slope of the yield curve.

Historically, yield curves have mostly been upwardly sloping (short-term rates lower than long-term rates), but there have also been several periods when the yield curve has either been flat or inverted. One question often posed by investors is whether inverted yield curves predict a future stock market decline. While the handful of instances of curve inversions in the US may concern investors, the small number of examples makes it difficult to determine a strong connection, and evidence from around the world suggests investors should not extrapolate from the US experience.

Exhibit 2 illustrates growth of a hypothetical $1,000 investment in the S&P 500 Index since June 1976 plotted against the difference between 10-year and 2-year Treasury yields. This difference is referred to as the term spread[1] and is a commonly used measure of yield curve steepness. Also marked on the chart are the onset of the four periods when the yield curve inverted for at least two consecutive months, and short-term rates began to exceed long-term rates. 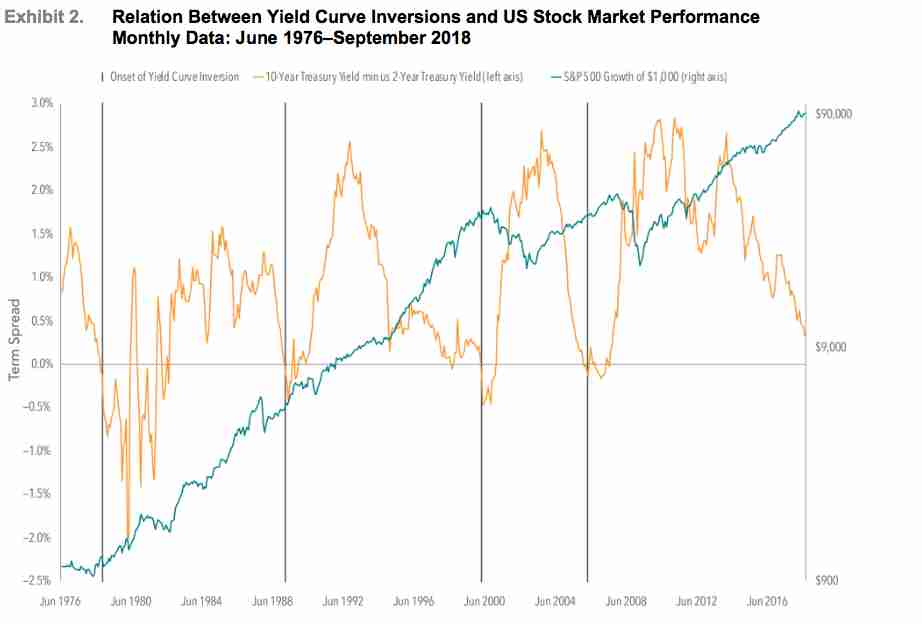 The inversion prior to the 2008 financial crisis is interesting to review. The US yield curve inverted in February 2006, after which the S&P 500 Index posted a positive 12-month return. The yield curve’s slope became positive again in June 2007, well prior to the market’s major downturn from October 2007 through February 2009. If an investor had interpreted the inversion as a sign of an imminent market decline, being out of stocks during the inverted period could have resulted in missing out on stock market gains. And if the same investor bought additional stock once the curve’s slope became positive, they would also have been exposed to the stock market weakness that followed.

The small number of US yield curve inversions over the last 40 years makes it challenging to draw strong conclusions about the effect on stock market performance. We can, however, look at other countries to gain a better sense of the relation between inversions and subsequent market returns. Exhibit 3 shows the hypothetical growth of 1,000 of the country’s local currency invested in the local stock market index the month before yield curve inversions began in five major developed nations, including the US, since 1985.

In 10 out of 14 cases of inversion, local investors would have had positive returns investing in their home markets after 36 months. This is not much less than the historical experience of these markets over the same time frame, regardless of the shape of the yield curve.[2] These results show that it is difficult to predict the timing and direction of equity market moves following a yield curve inversion.

Though the data set is limited, an analysis of yield curve inversions in five major developed countries shows that an inversion may not be a reliable indicator of stock market downturns. So, what can investors do if they are concerned about potential equity weakness? By developing and sticking to a long-term plan that is in line with their risk tolerance, investors may be better able to look past short-term noise and focus on investing in a systematic way that will help meet long-term goals. 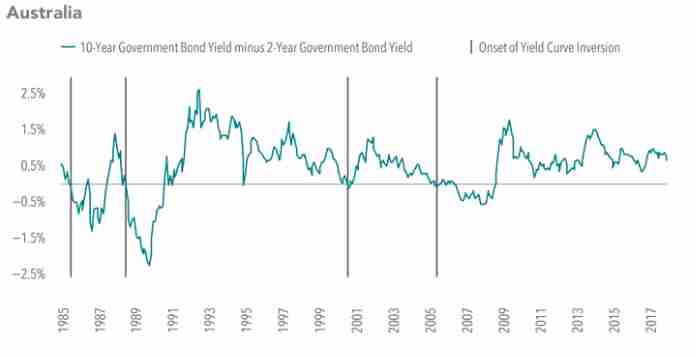 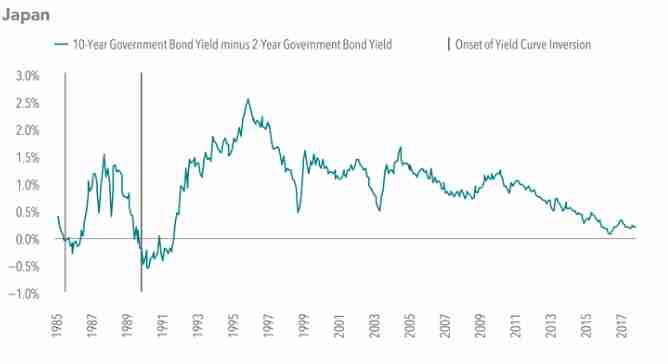 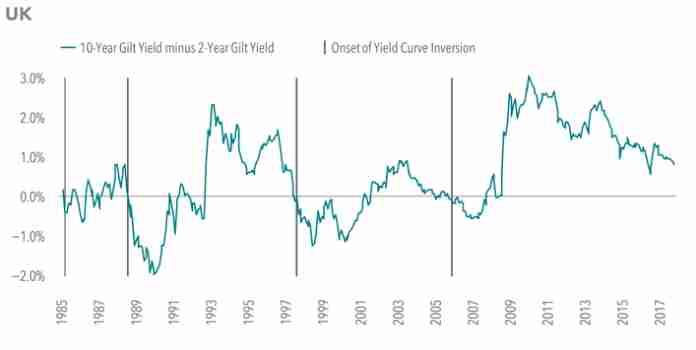 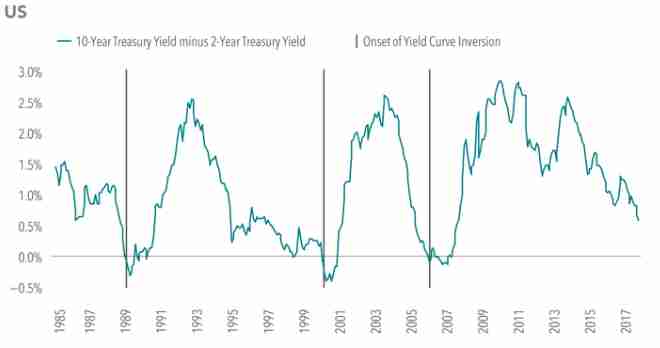 Indices are not available for direct investment. Their performance does not reflect the expenses associated with the management of an actual portfolio. Past performance is not a guarantee of future results. Diversification does not eliminate the risk of market loss.

There is no guarantee investment strategies will be successful. Investing involves risks, including possible loss of principal. Investors should talk to their financial advisor prior to making any investment decision. There is always the risk that an investor may lose money. A long-term investment approach cannot guarantee a profit.

All expressions of opinion are subject to change. This article is distributed for informational purposes, and it is not to be construed as an offer, solicitation, recommendation, or endorsement of any particular security, products, or services. Investors should talk to their financial advisor prior to making any investment decision.